Skip to end of banner Go to start of banner

Please note that the effect described in this page refers to localized volumes such as clouds, smoke and fire. For the global, uniform fog, please refer to this page instead.

Redshift can render non-homogeneous volume objects such as smoke and fire. A volume's shape can be specified either through an OpenVDB file or, in certain cases, via each individual DCC's volume creation functionality.

To define the volume's shading, a Redshift Volume Shader needs to be assigned to the volume. This is explained below.

A cloud bunny in the Cornell box

OpenVDB files are to volumes what EXR files are to textures. While a texture stores pixels (also called texels), an OpenVDB file stores voxels which are 3D pixels. Each voxel stores information that describes the volume at a particular XYZ point. For example, it can store a density value which tells the renderer how opaque or transparent the volume is at that point. In some ways, this is similar to the alpha channel in a PNG or EXR file.

OpenVDB organizes its voxel data in channels. As mentioned above, a typical channel is 'density'. Another channel is 'temperature' which tells us how cold or hot a voxel is. As it will be shown later, the temperature channel can be used to render fire.

One thing to remember with OpenVDB channels is that they are named. In theory, a 3d app could be exporting VDB density information in a channel named "bob". Thankfully, though, most applications follow fairly standard naming conventions. In a later section of this document we'll show how to use Redshift log files to find out the channel names within an OpenVDB file. Knowing the channel names of your OpenVDB file is essential when using the Redshift Volume Shader, as it will be shown below!

The volume grid contains the options shown below:

You can use the filename box to point to an OpenVDB file. In this case we pointed to the bunny_cloud.vdb file which was downloaded from http://www.openvdb.org/download
This is what's shown in Softimage when the Display Mode was set to "Points"

Once the Redshift volume shape is created, you can click and see the follow options in the attribute editor:

You can use the filename box to point to an OpenVDB file. In this case we pointed to the bunny_cloud.vdb file which was downloaded from http://www.openvdb.org/download
This is what's shown in Maya when the Display Mode was set to "Points".

You can create a Redshift volume in 3dsMax through Create->Geometry->Redshift->Volume, as shown below:

You can use the filename box to point to an OpenVDB file. In this case we pointed to the bunny_cloud.vdb file which was downloaded from http://www.openvdb.org/download
This is what's shown in 3dsmax when the Display Mode was set to "Points".

OpenVDB files might be in a different coordinate axis system compared to 3dsMax's. In this case, we had to rotate the bunny by 90 degrees.

You can use the path setting to select an OpenVDB file.

In this case we pointed to the bunny_cloud.vdb file which was downloaded from http://www.openvdb.org/download
This is how it appears in Cinema 4D when the Display Mode is set to "Points", with small adjustments to the Maximum Points to Display, and Prune Threshold settings.

To render OpenVDB files you only need to enable this option in the RS OBJ spare parameters. The plugin will extract the OpenVDB file path from the “file” parameter available in the File OBJ node to load the volume data at render time. 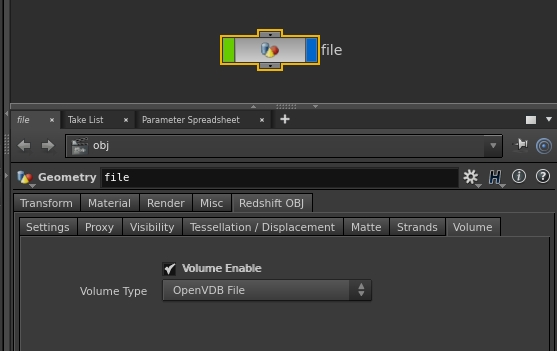 The plugin can extract the volumetric data from the Houdini Volume and VDB primitives. You don’t need to convert them to VDB objects or save them to OpenVDB files. To render a volume primitive, you only need to add the RS OBJ spare parameters to the volume node (for example a pyro_import node) and enable the volume rendering in volume/vdb primitive mode. 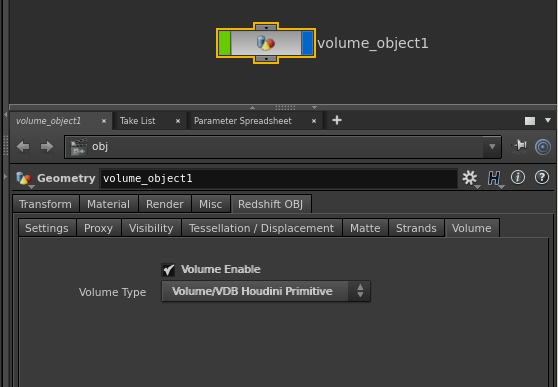 The file sequence attributes work just like those found in the file node in Maya. When Use File Sequence is enabled, Frame Number and Frame Offset together define which frame will be loaded by the simple formula frame_to_load = frame_number + frame_offset. By default, when you enable Use File Sequence, Frame Number is set to equal the current frame time by means of an expression. In other words, Frame Number will track the current frame. Arbitrary expressions can be used to drive the values of Frame Number and Frame Offset to perform more advanced numbering such as looping or ping-pong.

Selects how the volume data will be shown in the 3d app's viewport. The choices are Bounding Box (where only the bounding box is shown), Points (where a number of representative points from the grid are shown) and Bounding Box & Points (where both the bounding box and points are shown). The number of points shown is controlled by the Max Points and Prune Threshold, explained below

Normally, when switching to a bounding box view, any allocated preview points are freed. Enabling this option keeps the preview points in memory so that the user can quickly switch between bounding box and points without having to resample the OpenVDB file.

Specifies the maximum number of points that would be drawn if the OpenVDB file was completely filled.

Any OpenVDB voxels that are lower or equal to this value won't be drawn as points. This is useful to cut away empty space during volume data previewing.

To create a Redshift Volume Shader in Maya, go to Get->Material->Redshift Volume Material. The following options will appear in the attribute editor.

To create a Redshift Volume Shader in 3dsMax, go to the material editor and in Redshift Renderer's Materials section, choose Redshift Volume Material. The following options will appear:

To create a Volume material, from the Redshift menu select the Volume option from the Materials sub-menu

Within the ShaderGraph of the new material and RS Volume node can be found, with the following settings

Before You Proceed, Create A Volume-Affecting Light!

To be able to see your volume, you'll need to place one or more volume-affecting lights in your scene. Simply create a Redshift light (any kind: physical, domelight, IES, etc) and ensure that its volume contribution scale is set to 1.0.

Important note! If the scene doesn't contain any volume-affecting lights, the volume will render black!

As it can be seen, the Redshift Volume Shader is divided in three shading components: scatter, absorption and emission.

You can think of scatter as "diffuse". Absorption is "transparency". And emission is "incandescence" or "self-illumination".

All three shading components have a "channel" textbox. As mentioned earlier, each OpenVDB voxel can contain values that describe different properties of the volume. Typical examples include 'density' and 'temperature'. If your OpenVDB file was exported from SideFX Houdini, it will almost certainly contain a channel called 'density'. And if it's a fire or explosion effect, it will also contain a channel called 'temperature'. The density channel name (in this case 'density') should be typed in the scatter channel box. And the temperature channel name (in this case 'temperature') should be typed in the emission channel box.

But what if our OpenVDB doesn't contain channels called 'density' or 'emission'? What if they were called differently? You can use the Redshift Log File to find out which channels are contained in the OpenVDB file. When Redshift loads an OpenVDB file, it prints out the names of all the channels it contains. This is how this information looks like in the Redshift log file:

In this particular case, we can see that bunny_cloud.vdb contains one channel called 'density', so we type 'density' (without the quotes) in the scatter's channel box.

Scattering and absorption are similar to "diffuse" and "transparency" respectively. Redshift computes these using the OpenVDB file's density channel. We'll demonstrate how this happens through a series of examples.

If you want to make the volume brighter or darker, you can adjust the scatter coefficient without increasing the absorption one, as shown below

You can also use the "Scatter Tint" to adjust the overall color of the volume, as shown below

…and get the following psychedelic result!

The absorption shading component also contains a ramp, except it's a scalar ramp instead of a color ramp. Similar to the scatter component's color ramp, the absorption ramp allows for finer control of the opacity of the OpenVDB.

Say we wanted our volume's low-density edges appear transparent while making the higher-density areas become suddenly opaque (i.e. a higher absorption). We could make a ramp that looks like this:

Notice how the outer edges of the bunny (low density areas) are bright (lower absorption) while the deeper, denser parts are now darker because of the increased absorption.

The emission component is useful when creating effects such as fire and explosions. For this section, we'll use the fire.vdb file which was downloaded from http://www.openvdb.org/download
This file contains both a density and a temperature channel, as it can be seen in the Redshift log file:

Achieving the effect shown above involves adjusting the emission color ramp. The reason for that is that the temperature channel that is stored in the OpenVDB file is simply a number per voxel which tells us how hot a voxel is. It doesn't describe how red or yellow the fire is. It's up to the user to adjust the emission color ramp to 'translate' the temperature value into emissive colors.

For the above example, we used a ramp that looks like this:

One way to read the above ramp is this:

Achieving the expected look for emission can sometimes be challenging for two reasons:

In the advanced tab of the Redshift Volume Shader, you can find a parameter called "shadow density scale". This parameter allows a volume to appear more transparent or more opaque to shadow rays. It is, in essence, a "trick" that can help emulate multiple scattering, i.e. the effect of light bouncing around a volume. This can be achieved by setting the shadow density scale below 1.0.

The values stored in OpenVDB channels can vary wildly depending on the 3d app that was used to author them. This can be true for both density and emission channels.
The range remapping controls found in the advanced tab of the Redshift Volume Shader, allow the adjustment of these values just before Redshift uses them. The old min/max range is remapped to the new min/max range.

For example, a temperature channel might contains values that range between 0 and 100 but the emission color ramp only accepts inputs ranging between 0 and 1. In this case, the user should use old min=0, old max=100 and leave new min and new max at their default 0 and 1 respectively. In essence, this would 'squash' the 0->100 range into a 0->1 range.

As mentioned above, a volume-affecting light is required in the scene in order to be able to see our volumes. Each light has a "volume samples" parameter which defines the quality of lighting on the volume. If a volume is rendering noisy/grainy, it's likely that it's being lit by a light that doesn't have enough samples. The following pictures demonstrate the effect of the lights volume num samples. Notice how the right image is cleaner.

Tip The more transparent the volume, the more samples it will need to render cleanly. Relatively opaque volumes can render cleanly with fewer samples.

When using global illumination (GI), volume noise can appear because of brute-force GI rays, too.

In the scene below we disabled our domelight, made the ground plane emissive and enabled brute-force GI. The effect is GI lighting coming from below the bunny. Notice how the image using more GI rays is cleaner.